A number of announcements were made last week by the Provincial Growth Fund. Initiatives in the Bay of Plenty, Tairāwhiti, and Northland received funding. 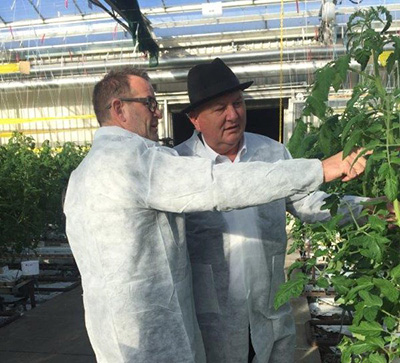 Regional Economic Development Minister Shane Jones is shown around at T&G Global in Reporoa where the Organic Waste Recovery Facility will be built on land adjacent to their tomato glasshouse operation.

In the Bay of Plenty, we announced funding for two pioneering business proposals for New Zealand. Geo40 Limited will receive $15 million from the PGF, made up of a loan and convertible note, to build and operate a large scale extraction plant at the Ohaaki geothermal site near Taupo, while Eco Gas Limited Partnerships will receive a $7 million loan to build a demonstration biogas plant in Reporoa.

In Tairāwhiti the PGF invested in projects to support medical research, wood processing and social enterprise to further enhance the region’s economic potential.

Four investments were made in wood processing, as well as a social enterprise to build on its current success and the establishment of a medical research lab which could create benefits globally.

The four initiatives that received funding in Tairāwhiti included:

In Northland the PGF invested in the rapid expansion of a labour intensive, high-tech hydroponic berry growing operation. Family-owned Onyx Capital Limited will receive a loan of $2.37 million for the first phase of expanding its operations, which will see an extra four hectares of hydroponic berries planted and create 45 full-time local jobs. Maungatapere Berries’ expansion of its existing small-scale business will help introduce a new export industry into Northland and create a centre for hydroponic excellence for other growers.

Regional Economic Development Minister Shane Jones said each initiative announced allowed its region to make the most of its strengths and opportunities and the PGF was proud to be supporting them.