What changes when you invest that much in a region’s roading network? Better roads? Yes – but also much, much more.

On average, the Gisborne District Council reports, around 120 local people are working on Provincial Growth Fund projects at any one time. That means 120 whānau (families) are better off. It also means local companies growing, and companies that service those companies are also growing. It means the whole region is looking up.

Tania Coleman – moving fast with ProTraffic and the PGF.

A year ago Tania Coleman was working part-time at a local pub and kohanga. Today she has multiple qualifications under her belt and is a site traffic management supervisor (STMS) responsible for ensuring the safety of site workers, motorists and her staff, working for local roading contractor ProTraffic.

“I love being out and about, making our people safe and ProTraffic has invested so much in me. I’ve been allowed to work up the ladder and this job means everything to me and my whānau. This summer I have the chance to be based in my hometown Tokomaru Bay and be close to my whānau. This means so much to me.”

In the last twelve months, ProTraffic has almost doubled in size, up to 30 staff from 18 this time last year and six the year before.

This number is likely to grow even further at the start of the construction season in November.

ProTraffic Managing Director Kurt Allan says the funding from the Provincial Growth Fund has provided ProTraffic the confidence to continue to grow their business and their people.

“We have been able to confidently take on more staff and invest more time and resources into training and development.”

He says the investment has helped the company support other local businesses, as well.

“We now have 16 vehicles and one on its way. Every one of our trucks needs a custom-made deck and up to ten thousand dollars’ worth of light fixtures, all of which we get installed by local suppliers. I really enjoy the fact that we can employ other locally-based companies to do this work for us.” Ruatorea based contractors Blackbee, Kuru and Parata Contracting are growing and offering alternatives to traditional jobs in forestry and farming in Ruatorea.

Kuru contracting is expecting to grow from 52 current employees to excess of 70 in the next two months. Over 80 per cent of their staff are from the East Coast.

Matanuku Parata, from Kuru, says investing in local people and creating an organisational culture where people love to work is the key to success.

“The social aspect of the Provincial Growth Fund has started more conversations about the social return from investment for the local community.”

Neihana Brown-Ratahi is the first non-family employee at Blackbee Contracting.

“When I returned to the East Coast to be closer to my kids two years ago, I had no idea I would end up working in roading. I now have the highest possible heavy machinery licence and I’m transporting million dollar machines around the coast. This industry has opened so many doors for the future.”

Twelve months ago Blackbee Contracting had three staff members, one truck and a digger. One year later, they now have ten full time staff, four trucks and five diggers.

Boss Blackbee says providing quality work and training for people is the most important aspect of the extra investment.

“We want to show everyone that East Coast people are more than capable of providing this level of service. There needs to be more confidence in our people to step up and deliver in order for our communities to prosper.” Te Rangi Marie Bartlett being a role model and achieving her goals.

Te Rangi Marie Bartlett started two months ago as a traffic controller at Parata Contracting and is relishing the opportunities the job offers.

“This job has saved me. I now feel that I am a role model for Rehua, my son. I’m now committed to achieving my next goal of working on heavy machinery,” said Ms Bartlett.

Parata Contracting operations manager and part owner Kat Kaiwai started the company in October last year and now has 14 full time employees. She is especially excited that the road safety message is spreading through the numbers of people involved in the contracting industry.

“Rangatahi who were once speeding up and down our local roads are now out there making a difference. As this industry is so focused on safety, they are teaching others how to be safe on the roads. It’s an amazing sight to see.”

As Downer East Coast Branch Manager Patrick Kershaw says the PGF roading investment is creating a region with better roads but also a region where people can grow and the whole region can thrive. 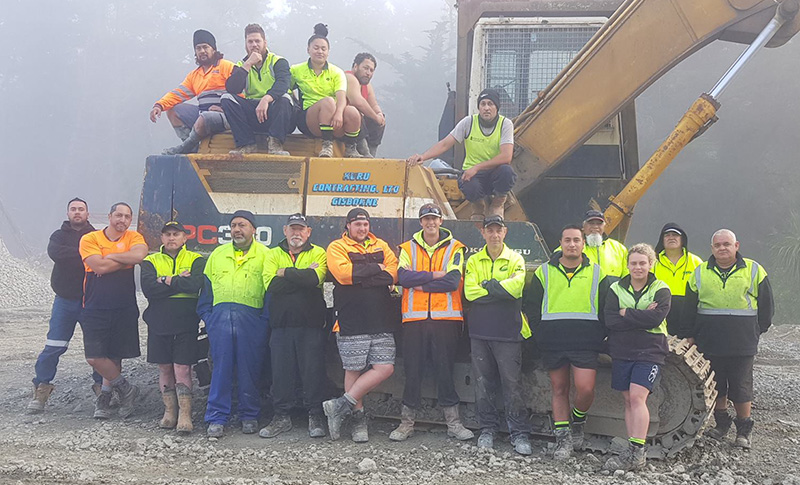