Kawerau industrial development on the road to success

A $19.9 million investment from the Provincial Growth Fund (PGF) will help develop essential infrastructure for an industrial hub in the Bay of Plenty town of Kawerau. 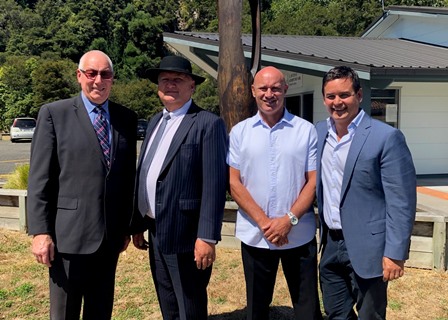 Funding will go to three projects to further develop the Putauaki Trust Industrial Hub, an initiative which will stimulate economic growth throughout the Eastern Bay of Plenty.

The development is the result of more than a decade of planning work from Putauaki Trust, council and businesses, and is expected to create at least 150 jobs in Kawerau.

Putauaki Trust General Manager John O’Brien said he is humbled by the announcement and grateful for the opportunities the three projects will bring to the local community.

“We’ll be able to attract businesses with long-term, sustainable operations. That will provide employment for our rangatahi today, and the rangatahi of tomorrow," O'Brien said.

The PGF has invested $9.6 million grant in the construction of rail siding at the Kawerau Container Terminal.

The new siding will allow containers to be loaded and unloaded on-site, removing an estimated 40 daily truck trips from local roads and reducing Co2 emissions.

A further $7.5 million for the Putauaki Trust industrial roading extension will connect around 50ha of vacant plots within the Hub to existing roads by adding a turning bay and a roundabout on SH34.

The remaining $2.8 million from the PGF will go towards the Kawerau Off-Highway Road, a new 1.6km road which gives direct access to the Kawerau Container Terminal. This will be used by large vehicles that cannot use the existing highway.

This project has been a decade in the making, with partnership between Māori, local council, businesses and the community creating a landmark change for the future of Kawerau.