The Provincial Growth Fund (PGF) is investing $16.8 million to complete the Ruakura Spine Road project in the Waikato region with the creation of 200 construction jobs. 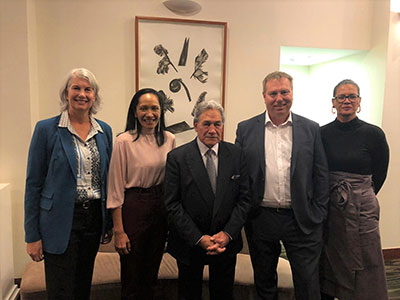 The announcement was made at an event hosted at the Tainui-owned Novotel Hamilton hotel on 9 June 2020.

Construction of the Ruakura Spine Road within the eastern suburbs of the Waikato District will unlock access to the multi-modal Ruakura Inland Port, Logistics and Industrial development.

Employment will increase substantially with an estimated, 6,000 to 12,000 jobs resulting from the development.

The funding will provide critical infrastructure for the Ruakura Inland Port area that will connect to the Waikato Expressway and the East Coast Main Trunk. Long term development plans include the potential for a housing development.

Tainui Group Holdings (TGH) is matching the Government’s investment with $16.8 million and Hamilton City Council will also be contributing $5 million.

The development will unlock millions of dollars of investment in associated infrastructure by TGH and its partners. The combined funding will be used for additional scope work including: