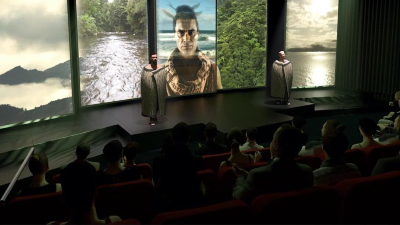 A glimpse inside the Manea Footprints of Kupe Centre.

The nationally significant centre will bring a growing number of visitors and local jobs to its remote region in Hokianga, Northland.

The centre tells the story of Polynesian explorer Kupe, who discovered New Zealand more than 1000 years ago and his life-long connection to Hokianga from a Ngāpuhi perspective. It also highlights and celebrates stories and traditions of the area’s rich Māori tradition.

Hokianga was one of the first areas of New Zealand to be settled, first by Māori and then Europeans settlers, and remains a heartland for Māori people.

“The Manea centre will be significant locally and also nationally as it preserves the story of Kupe and his journeys across New Zealand,” says Nicki Sutherland, PDU Director, Regional Development (North).

“The additional benefits to the local community, on top of the visitor experience, is through having a community asset that provides facilities locals can share and direct employment.

Up to 14 jobs will be created at the centre when it is fully operational. Up to 100 people worked on the two and a half years construction of the centre.

“The centre has a commitment to employing local people which is great for a remote area with very high unemployment,” Ms Sutherland says.

There is an opportunity to explore Hokianga’s history, Māori spiritual beliefs and the arrival and impact of Europeans via a series of interactive booths.

Taonga will also be on display that has been repatriated from various museums.  Pre-COVID-19 up to 13,000 visitors were forecast in the first year, increasing to more than 60,000 by year five.

The Provincial Development Unit provided $4.6 million towards the centre.

The centre also includes a memorial to the SS Ventnor and those who were lost when it sank off the Hokianga coast in 1902 on its chartered journey to repatriate the remains of 499 Chinese miners to China’s Guangdong province.

When the boat sank, the remains were lost, along with 13 sailors and passengers who died in the wreck. The remains of the dead were collected by locals when washed on shore and were buried near Te Roroa ancestral burial grounds and the local Rawene Cemetery.

The Provincial Development Unit provided $100,000 for the memorial’s construction at the Manea centre.