Find out more about the Productive, Resilient, Inclusive, Sustainable and Māori-enabling (PRISM) framework for the Regional Strategic Partnership Fund. 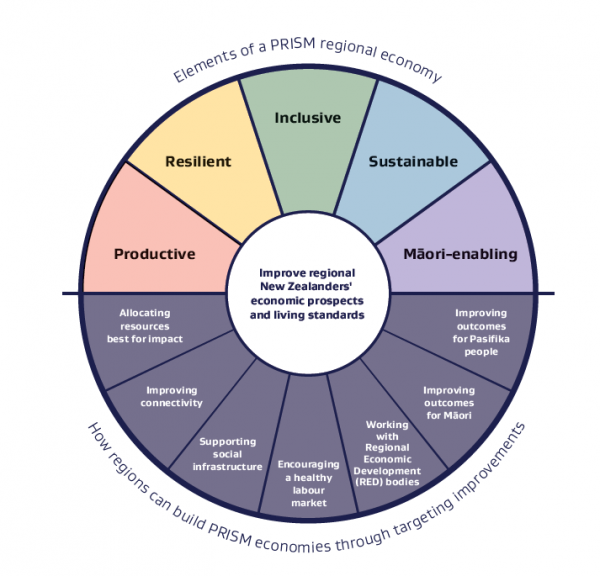 The PRISM Regional Economies Framework tool helps regions build on their economic development strengths and address their challenges. The framework is split into two parts:

Regions don't need to focus on every PRISM element and opportunity area. They can use the framework to prioritise factors that are most important and relevant to them, and identify how to achieve results.

People and businesses in productive regional economies can make the most of high-quality economic opportunities. Factors contributing to this include:

People and businesses in resilient regional economies can respond effectively to external forces, such as:

People and businesses' participation in inclusive regional economies is not limited by their location. Everyone can provide financially for themselves and their family, purchase goods and services, and access the skills, training, and specialist knowledge needed for individual and enterprise growth.

People and businesses in sustainable regional economies use all types of resources sustainably, including natural, human, social, physical and financial.

People and businesses pursue Māori regional economic development as a pillar for the vitality of the region’s economy as well as for the wellbeing of Māori who whakapapa there.

A well-connected region can physically and digitally access networks and markets offering opportunities to import and export goods and services. This connectivity also enables it to acquire expertise, skills and knowledge.

Cities benefit from bringing commercial networks together in one place. Improving connectivity helps regions address some of the challenges that often go hand-in-hand with their relative isolation, such as underdeveloped local networks and limited opportunities.

Any decline reduces a region’s ability to provide social infrastructure such as housing, education and healthcare. It can also affect civic pride and people’s sense of belonging.

To make the most of economic opportunities, businesses must attract people with the right skills to the right place. Regional Skills Leadership Groups will develop workforce plans for regions, informed by regional economic development priorities and refreshed planning documents

RED groups set the direction for economic development in a region or territorial area, particularly through RED planning documents. They also advise and support local businesses and entrepreneurs.

Māori and iwi play a large role in New Zealand’s economy. However, income levels, access to the labour market, access to capital and other outcomes are often worse than for non-Māori. Improved economic prosperity in any region is dependent on better outcomes for Māori.

Not all regions have large Pasifika populations. However, Pasifika people also often experience poorer outcomes (including income levels, access to the labour market and access to capital) than New Zealanders of European or Asian descent. As with Māori, improving outcomes for Pasifika people supports economic prosperity overall.