Hamilton locals are celebrating the reopening of a popular cycleway in the Waikato region, which has undergone remediation work thanks to a funding package administered by the Provincial Development Unit (PDU). 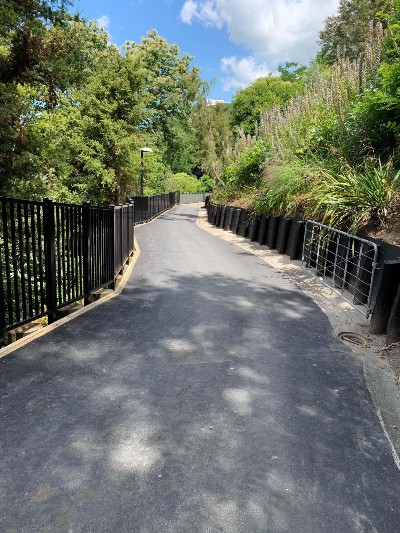 A section of the well-loved Te Ara River Path cycling track was re-opened on 14 December 2020.

Mayor Paula Southgate says the funding has enabled Hamilton City Council to support social procurement outcomes in the region, by working with contractors to employ people who lost jobs due to COVID-19.

“The river ride path is one of Hamilton’s most popular outdoor spaces and these repairs have been a long, long time coming,” says Ms Southgate.

“It’s been great to see 50 people employed and gaining skills that some of them are already using in new jobs. It’s been a great outcome for the city and shows how working in partnership can deliver great results.”

Redeployed workers carried out replanting and vegetation work along a section of Te Awa River Path between London Street and Bryce Street, which was closed in 2018 following a structural failure.

Waikato-Tainui iwi contributed to a series of training courses offered by council contractor Downer, to ensure local cultural knowledge and practices were at the centre of remediation work.

“We know the public have been waiting for the path to be useable for a long time so it’s fabulous to see this section finally back up and running in time for the warmer months,” says Ms Southgate.

The Hamilton City Council hosted an opening ceremony on Monday 14 December at the Kirikiriroa Paa Site, which was attended by community members and sponsors.

This section of the cycleway forms part of the larger Te Awa River ride, a 70 kilometre path that follows the banks of the Waikato River from Ngaruawahia to Horahora.